*Share the first sentence (or so) of the book you are currently reading, along with your initial thoughts about the sentence, impressions of the book, or anything else the opener inspires. Please remember to include the title of the book and the author’s name.

*The Friday 56 hosted by Freda’s Voice 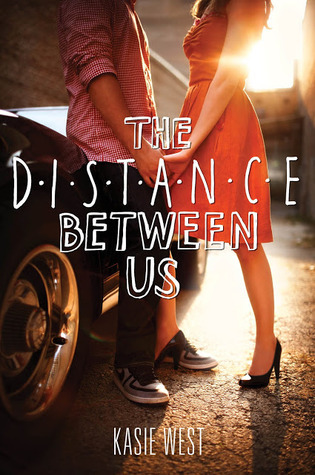 Title: The Distance Between Us

Summary via Goodreads: Seventeen-year-old Caymen Meyers studies the rich like her own personal science experiment, and after years of observation she’s pretty sure they’re only good for one thing—spending money on useless stuff, like the porcelain dolls in her mother’s shop.

So when Xander Spence walks into the store to pick up a doll for his grandmother, it only takes one glance for Caymen to figure out he’s oozing rich. Despite his charming ways and that he’s one of the first people who actually gets her, she’s smart enough to know his interest won’t last. Because if there’s one thing she’s learned from her mother’s warnings, it’s that the rich have a short attention span. But Xander keeps coming around, despite her best efforts to scare him off. And much to her dismay, she’s beginning to enjoy his company.

She knows her mom can’t find out—she wouldn’t approve. She’d much rather Caymen hang out with the local rocker who hasn’t been raised by money. But just when Xander’s attention and loyalty are about to convince Caymen that being rich isn’t a character flaw, she finds out that money is a much bigger part of their relationship than she’d ever realized. And that Xander’s not the only one she should’ve been worried about.

My eyes burn a hole in the page. I should know this. I can usually dissect a science question easily, but the answer isn’t coming to me. The bell on the door dings. I quickly tuck my homework beneath the counter and look up. A guy on a cell phone walks in.

His eyes light up with a smile that doesn’t quite reach his lips, but that seems to imply he actually finds me amusing. My mother always told me guys were put off by my sarcasm.

I’ve been reading a lot of really dark, emotional stories lately and I needed a break from that. I’ve heard very good things about this book. It’s been sitting on my kindle for a while now so I’m excited to finally read it.

What’s on your reading schedule for this weekend?

Have you read The Distance Between Us? Let me know what you thought about it.

Thank you for reading and I hope you have a nice weekend.