“Waiting On” Wednesday is a weekly event, hosted at Breaking the Spine, that spotlights upcoming releases that we’re eagerly anticipating.

This week, I’m waiting on The Loose Ends List by Carrie Firestone

* I discovered this title while looking through Goodreads and I was immediately drawn in by the cover. It is such a beautiful cover. The story sounds really interesting and I can tell it’s going to be extremely emotional. I ‘m curious to see how well the author portrays the emotions of the story and the relationships of the characters. 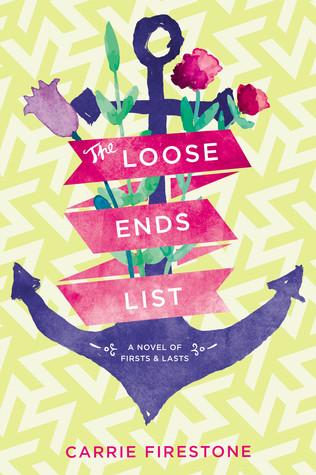 Seventeen-year-old Maddie O’Neill Levine’s grandmother is a young-at-heart socialite who has always been Maddie’s go-to confidante. Although Maddie and the rest of her family have learned to expect the unexpected from their matriarch, Gram still manages to shock them all when she announces that she has booked the O’Neill clan on a secret death-with-dignity ship called the Wishwell; Gram has terminal cancer and is determined to leave the world in her own way–and give her family an unforgettable summer of dreams-come-true in the process.

Soon, Maddie is on the trip of a lifetime with her wacky family. Aboard the ship, Maddie bonds with other Wishwellians and falls for Enzo, the son of the ship’s owner, as they travel the globe. But despite the copious laugher, headiness of first love, and wonder of the glamorous destinations, Maddie knows she is on the brink of losing Gram, and she struggles to find the strength to let go in a whirlwind summer shaped by love, grief, and the power of forgiveness.

What new book are you waiting on? Leave a comment below.

5 thoughts on “Waiting On Wednesday #32 ~ The Loose Ends List”